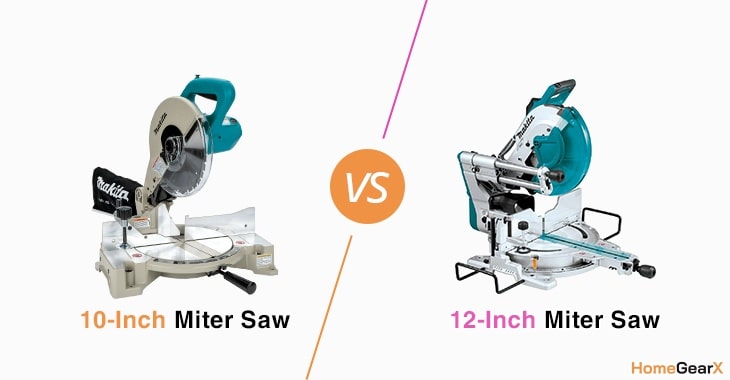 Nothing surpasses the miter saw in performance when it comes to making angled crosscuts. These saws are also quite versatile and will hence come in handy for a variety of other cuts. But like any other power saw, you will need to choose from several options when shopping for one.

While miter saws can come with blades that are anywhere between 7-1/4 to 20 inches, the 10 and 12-inch miter saws are the most popular. Many woodworkers prefer them as they provide the perfect balance between power, size and cutting capacity.

However, for many users, the difficulties set in when it comes to choosing between the 10 and 12-inch miter saws given that they both do an amazing job.

But, if you do not have the privilege of buying both, you can still choose a saw that will give you the best service if you know how these two differ and what each is good for.

Here we show you how to choose between these miter saws with overviews of each and by explaining how they compare. 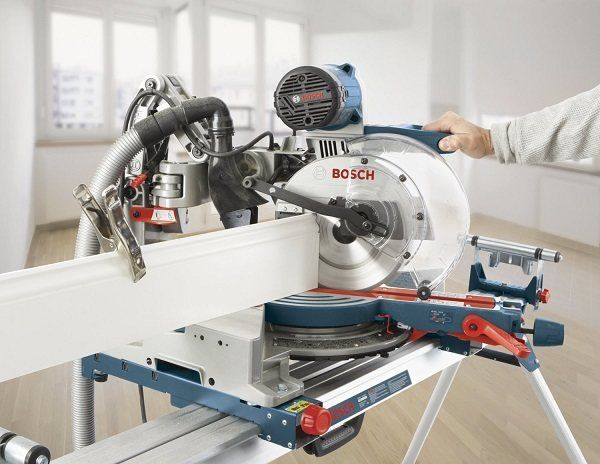 The 10-inch miter saws are the most widely available of the two types and what most woodworkers seem to prefer. And this is for a good reason because besides being more affordable, they are also relatively more versatile.

These miter saws are ones that use the 10-inch blade, and they have been built to cut materials that are up to 6 inches long. For many woodworkers, this is more than enough given that most trim and molding board fall within this width.

Also, these miter saws are generally smaller and more portable which is always a huge advantage for the many users that need to use their saws in different locations.

Given the smaller blade size, you will also get a faster spinning blade that will deliver higher RPM than you would get with the larger blade on the 12-inch miter saw.

Besides the cheaper cost of buying the saw, the 10-inch blades are also significantly more affordable when compared to the 12-inch blades. This means that having this miter saw will also come with a lower cost of ownership.

However, given the smaller blade size, the 10-inch miter saw will have a smaller cutting capacity and will not make cuts as deep as the 12-inch types. Hence, these might not be the best saws for those looking for something for bigger projects. 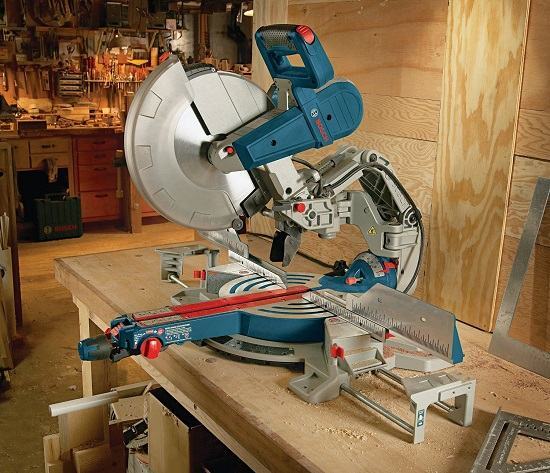 While the 10-inch miter saws might be the more popular types, the 12-inch models still have a huge enough following which means they also have a lot to offer.

These are typically larger and more powerful saws that will in many instances be powered by a 15-amp motor. The higher motor power means they will make up for what they lack in speed by delivering more cutting power.

With the larger blade size and powerful motor, these miter saws can cut larger materials than the 10-inch can handle and will hence be better suited for handling larger woodworking projects.

When working with thicker and heavier wood or massive crown molding pieces, you will be happy to have the 12-inch miter saw around as it can be a real time-saver as it finishes up the job faster and also saves you a lot of labor.

Overall, the 12-inch miter saws will also be designed to be more rugged since they are meant to tackle harder projects, and so they will often outlast most 10-inch models out there.

But the larger and more powerful motor and heavy-duty construction also mean that these miter saws will be bulkier and less portable. Also, the 12-inch miter saws will come at higher price tags than the smaller 10-inch saws and their replacement blades are pricier.

And to help you figure out which one to go for, here is what makes these two miter saws different.

Blade diameter has a huge impact on the cutting capacity that you get with miter and most other power saw types. Since these two saws will have different blade sizes, it should be obvious that they also provide different cutting capacities.

A typical 10-inch miter saw can cut material up to 6-inches wide, but it will struggle when it has to cut wood pieces larger than the 4×4. But give the typical workpieces that many users will deal with when using these saws, cutting capacity will hardly ever be an issue as they seem to get the job done efficiently enough.

12-inch miter saws will not only have larger blades but are also powered by a larger and more powerful motor which gives them the larger cutting capacity.

A good model will easily cut through a 6×6 piece with relative ease and in one pass something that you cannot achieve with the smaller 10-inch saw.

Better yet, these powerful saws are also able to cut through hard materials like hardwoods with ease thanks to the motor power and slow spinning blade.

Small blades will spin faster than the larger ones, and so with this in mind, you can expect to get a much higher RPM 10-inch miter saws than the 12-inch models.

While the speed that you need will depend on the cut that you want to make, a high-speed blade often results in a smoother and sharper cut. High speeds will be perfect for cutting through softer materials without damaging them.

A 10-inch miter saw will provide speeds of up to 5,000 RPM. But even with the best 12-inch saws, you will hardly get anything more than 4,000 RPM which can be a little restrictive for some projects.

A wobbly blade is often super annoying and it can also affect the quality of the cut because a blade that keeps wobbling or is easily deflected will find it hard to maintain the cut line.

As many woodworkers will tell you, there is always an increased likelihood of blade wobbling and deflection when using a saw with a larger blade.

Hence, if deflection and wobble are your greatest concern, you will be better off sticking with the smaller 10-inch miter saw blade.

However, there is still debate among woodworkers out there on this subject with some claiming that only the low-quality 12-inch blades wobble because of their smaller weight.

Also, while still at this issue, it is worth keeping in mind that wobbling is hardly an issue for certain tasks such as framing. But for intricate jobs that require high precision such as when doing interior trim work, it can make a significant difference.

If you plan to be using your miter saw from one point such as in the workshop only, its size or how portable it is might not matter a lot. But, if you are like many other woodworkers that tend to carry and use their miter saws in different locations, this will be an important factor for you.

As obvious as it might sound, the 10-inch miter saws will be the smaller and more portable of the two miter saws given their smaller blade size and motor.

The small 10-inch miter saws will take up little space in your workshop and will be easier to pack and transport which is something that many professional woodworkers will love.

12-inch miter saws might take up a little more room, but as any other miter saw, they are still quite portable. If you have a good carry case, you can also easily move one.

Miter saws are generally quite versatile power saws, and so regardless of what you choose between these two, you can be confident that you will have a saw that will be very useful for a variety of projects.

With that said, the 10-inch models seem to have a slight edge when it comes to versatility given that the 10-inch blades are some of the most common for other saw types.

In many instances, it will also be possible for your 10-inch blade to fit the 12-inch miter saw. Given the more powerful motor on the latter, you will have a more versatile saw that delivers both high speeds and smoother cuts.

Nothing is more annoying for many woodworkers than having to shop all over for ages looking for a replacement blade as this can delay your projects.

If you are using the 10-inch miter saw, you will never need to go through this because the blades that these saws use are some of the most common for miters saws and most other saw types that use circular, disc-like blades.

As mentioned above, some 10-inch miter saws will even accept blades meant for table saws which can save you time and cash if you already have a table saw around.

The 12-inch blades, on the other hand, can often be hard to get as some stores will not stock them. Besides being hard to find, you will also not get a wide variety of options to pick from, and so you might need to settle for something substandard or a blade you do not like due to lack of any alternative.

Due to the sheer size of the 12-inch miter saws and the fact that they are more powerful, you can expect to pay significantly more for one than what you would pay for the 10-inch models.

Prices for 10-inch miter saws start at around $100, but it is also possible to get a few basic models that sell for a little under $100. The prices go up to around $300 with a few top-end models selling for a few bucks more than this.

With the 12-inch miter saws, prices will start at around $200 and can go as high as over $600 depending on the size, features brand and model.

Also, it is worth noting that besides being the pricier of the two, the blades for the 12-inch miter saws will also cost relatively more than the 10-inch blades which makes them also more expensive to operate.

Whether you buy the 10 or 12-inch miter saw, you can be confident that you will have a highly reliable saw for making crosscuts and for various other uses in the workshop.

Some woodworkers can afford both or do not have any problem buying the two, but the truth is that you do not need two miter saws that do pretty much the same things. But to choose between them, you need to know what each has to offer which should now be clear from our comparison above.

As for our recommendations, the 10-inch miter saw will be perfect for beginners looking for something more affordable for smaller projects. And the 12-inch miter saw is an excellent choice for professional woodworkers that tackle larger projects more often.