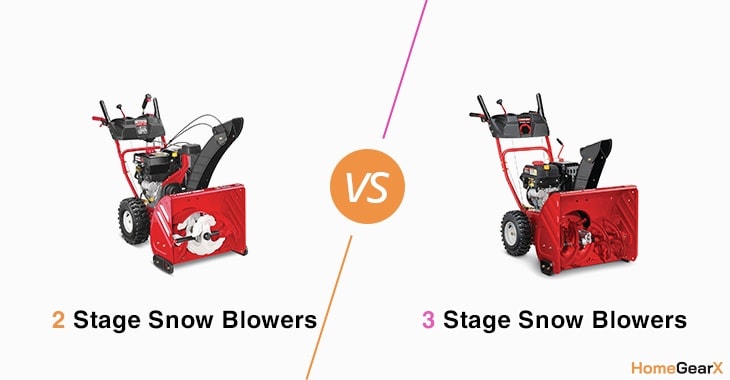 When you have just small areas to clear and when dealing with light snowfall, a regular single-stage snow blower is often more than up to the task.

But when there is a heavy snowfall when winter is at its peak, and you have to clear a larger driveway, you need to bring out your more powerful blowers. For most people, this often means the 2-stage or 3-stage snow blowers.

Those that live in areas that get super heavy snowfalls will probably have already both, but for everyone else, just one of the two should get the job done.

But, picking between them is not always easy because, despite the differences in the names, many users have a hard time telling them apart.

Here we aim to change this by showing you the pros and cons of both the 2 and 3-stage snow blowers and highlighting their key differences. 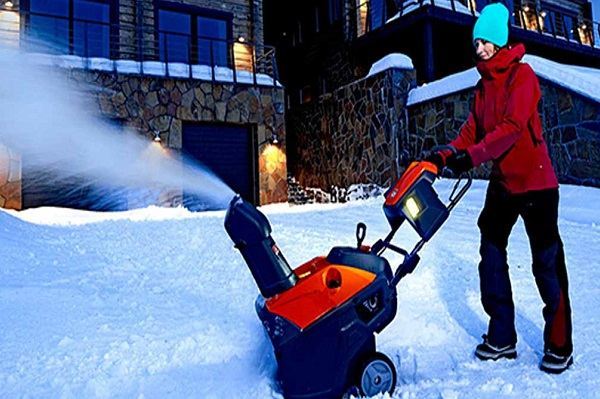 The 2-stage snow blow has been in use for ages, and it has almost become the standard for clearing driveways and walkways in many residential and commercial houses in North America.

What makes it popular is the fact that it is way more effective and faster than a single-stage snowblower and also does not cost as much and is not as bulky or pricey as a 3-stage snowblower.

This snow blower seems to outperform most other types when it comes to clearing concrete and gravel drives. And it will offer more size and model options than any other type to ensure it caters to a wide variety of users.

2-stage snow blowers get their name from the fact that they will clear the snow in two stages. The first stage will entail gathering and chopping down the snow while the second stage is leading the snow to the impeller and throwing it out.

Because these are much lighter than the 3-stage models, they will allow for control with one hand, and some models will even have some fancy features like a hand warmer.

However, when compared to the 3-stage snow blowers, they tend to be relatively noisier, and they also seem to require significantly more maintenance. 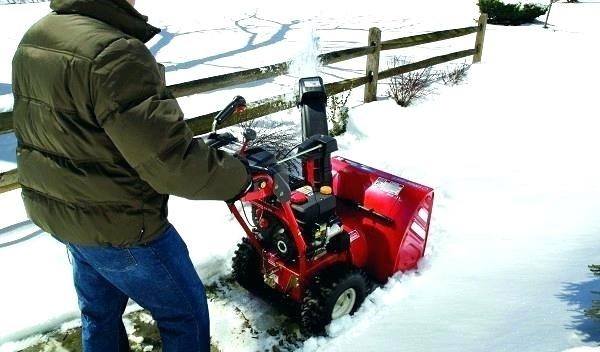 While the 3-stage snow blowers might look like a new revolutionary technology given that they are the youngest of the three main snow blower types, they are not.

These snowblowers have been in use since the 1970s and they have gained more popularity in the last couple of decades, but they are still not as widely used as the 2-stage snow blowers.

3-stage snow blowers are more popular with professionals, but they can still work well enough for both commercial and residential use as they are not as hard to use as they might seem.

While they include the two stages that you get with the 2-stage snowblowers, their 3-stage name stems from the fact that in addition to the two, they also have a third stage that is the accelerator.

The powerful accelerator helps to speed up things and hence allowing this snow blower to finish the job in a fraction of the time that a regular 2-stage or 1-stage model would take. Generally, these are also more powerful snow blowers which makes them perfect for heavy snowfalls.

Given the larger size and more powerful motor, these snow blowers are generally heavier and can hence be harder to handle, and it will take more effort to get them into tight places.

There are several factors that you will need to consider when choosing between the 2-stage and 3-stage snow blowers from your budget to where you intend to use it. But, to truly make the best choice between them, you need to first understand their differences and here are the main ones.

While snow blowers might look the same on the surface and will also blow snow the same way, they are not all made equally. Hence, it should be obvious the 2-stage and 3-stage blowers will work significantly differently.

The 2 or dual-stage snowblower will include both an auger and impeller which make up the two stages of its operation. In the first stage, the auger will gather and chop down the snow into smaller pieces.

On the second stage, the impeller takes charge and the snow will be led to it from where it is thrown through the discharge chute.

With the dual-stage snow blowers, you can get augers in a wide variety of sizes and designs as some will even be serrated to increase their efficiency.

With the 3-stage snowblower, the mechanism is pretty much the same as the 2-stage machines as it will also include the auger gathering and braking down the snow in the first stage and the impeller directing it to the chute.

However, these machines will include an accelerator that makes up the third stage, and its main role is to speed up things. With the accelerator, the snow will be chopped down at speeds that can be up to 10 times faster than what you get with a regular auger. And this also means the machine can get through heavy and wet piles of snow with much ease.

The size of your snowblower matters a lot as it determines how easy it will be to handle and hence the areas you can clear before fatigue sets in.

One of the things that make the 2-stage snow blower highly popular is the fact that it comes in a more compact size that makes it easy to handle. This snow blower is often much lightweight than the 3-stage models, and you can even move it with one hand.

The 3-stage, on the other hand, is often a bulkier and heavier machine which should explain why it is more popular with professionals as they are more used to handling all kinds of snow blowers.

However, when you use both machines long enough, they should be easy enough to handle. The 3-stage models will probably still give you a harder time when trying to clear tight places.

2-stage snow blowers are great all-round machines that you can use almost anywhere. They work great for both residential and commercial use and will be much better than the single-stage models.

The relatively smaller size and easy handling make them great for residential use as they will give homeowners an easier time. Their relatively faster, deeper and more efficient clearing (especially when compared to single-stage) makes them ideal for commercial use.

3-stage snow blowers are perfect for professional use with a user that knows how to handle them. In the hands of experienced individuals, these snow blowers can work magic as they will clear even the largest snow pileup super-fast.

For many users, the snow throw distances matters a lot because it will determine whether you will still have more cleanup work to do with a shovel afterward.

The further the snow blower can throw the snow the better it will be as it will get it out of the way completely and ensure you do not have to do any extra work. Luckily both the 2 and 3-stage snow blowers will offer some fantastic throw distances.

Depending on the model and size of 2-stage blower that you are using, you can expect to get a throw distance of between 25 and 50 feet which is good enough for many residential users.

For the 3-stage models, on the other hand, you can always be sure of getting at least 50-fee or more. This means that when using one in a typical home, there will hardly ever be anything more to do afterward as the snow will be thrown far enough from the home.

The drive mechanism determines how smoothly the snowblower will move through the snow and will hence affect its ease of use and convenience.

With the 2-stage snow blowers, you get to choose between the classic auger and engine drive mechanism to ensure you get something that will work for your particular situation. The engine-driven blowers will also include different gears for forward and reverse movement which makes then even more convenient.

Because the 3-stage snow blowers will come with a larger and more powerful engine given the heavy-duty work they do, they will typically be self-propelled. These blowers will make use of the power from the auger and accelerator to move forward. However, some models will also include a rear-wheel drive system.

You will hardly find any snowblower model out there be it a 2 or 3-stage model that will not produce any noise at all. Hence, the best you can hope for is to get something that produces the least amount of noise.

Given that the 3-stage snow blowers come with larger and more powerful engines, one can easily assume they will be the noisiest. But, with most models in this category, you will get relatively quieter snow blowing than you would with a typical 2-stage snowblower.

With the more technologically advanced 3-stage snow blowers, many manufacturers will make use of different technologies like Noise Guard Technology and noise-suppressing housing to deliver relatively quieter machines.

Snowblowers will require a significant investment, and so you need to be sure with their prices before committing yourself.

As expected, the 3-stage snow blowers will cost much more than the 2-stage options. Sometimes they can cost as much as double of what you would pay for a basic 2-stage model.

You can expect to pay between $400 and $1,000 for the 2-stage snowblower, but some top brands like Husqvarna still have some models that will cost more than this.

For the 3-stage models, the prices start from around $1,000 to over $2,000 but just like with the 2-stage models, some brands will have models that cost way much above this range.

But, it is important to keep in mind that prices are always changing and several factors determine what you pay for either snow blower such as the model and brand.

Every season comes with its unique challenges but for winter, snow buildup can be the most frustrating one for most people. But, with a good 2 or 3-stage snowblower, it should not give you sleepless nights as you can easily take care of the problem.

Choosing between the two high-performing and equally popular snow blowers should now be super easy. You will only need to decide how much you are ready to spend and keep in mind the differences between them highlighted above.

To help make your choice even easier, the 2-stage snow blowers will be perfect for anyone on the hunt for an easy to maintain and use snowblower for residential use. The 3-stage snow blowers, on the other hand, are a perfect choice for professionals looking for something faster and more powerful.