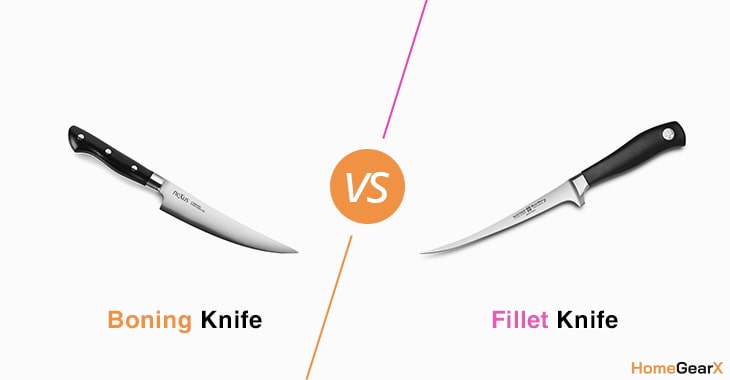 As you are trying to build up your set of knives, it will be important to know the differences between commonly confused knife types such as the boning and fillet knives.

These two look almost the same and many people also confuse them given that they are both meant for separating bones from different kinds of meats. And so it is not uncommon for people to use them interchangeably.

The best idea will be to have both in your knife set as they will be very useful when dealing with different kinds of situations. But, if you can only buy one at a time, it helps to know how they differ as this ensures you pick what suits your particular needs at the moment. 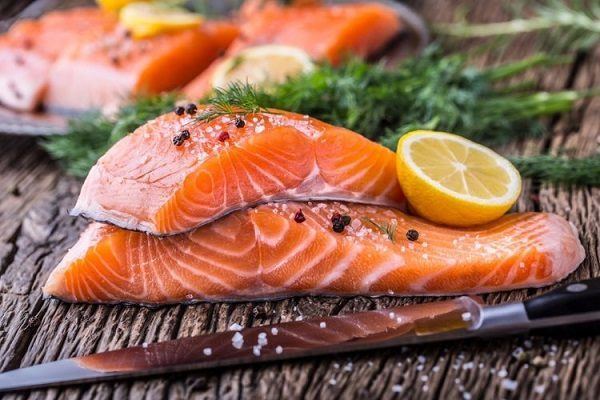 When you want to debone chicken, beef or pork, you will be happy to have a deboning knife around because besides making the job easier, it will also help speed things up.

You can easily spot a boning knife as it will feature a long, thin blade that has been designed to be easy to maneuver into and around the bones for faster deboning. It will also have a sharp and more flexible tip that will pierce through meat almost effortlessly.

Typically, these knives will come with 5 or 6-inch blade, but the length can be longer than this depending on the purpose, and some can also work as fillet knives as they are relatively more versatile when compared to the fillet knife.

However, in many instances, the boning knives tend to be a little pricier than the fillet knives, but this still depends on where you are buying and the brand. 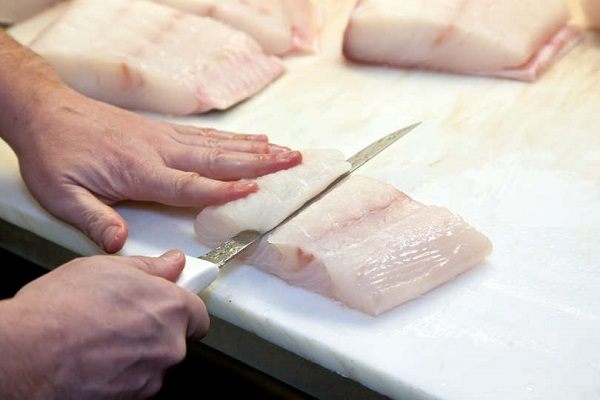 For those that fish a lot or just like fish, a fillet knife is a must-have as it will allow you to debone or fillet your fish faster and more effortlessly.

Fillet knives will come with a relatively longer and thinner blade than what you get on a typical deboning knife and will be more effective at separating the delicate fish meat and skin from the bones without ruining it.

Also, the thinner blades are designed to be more flexible which makes the knife easier to maneuver through the fish, and you can puncture the skin easily.

These knives will have blades that are between 4 and 9 inches long, and the ideal length for you will depend on the particular fish type you will be working on.

But when using these knives, you will need to take extra precaution when filleting thicker meats as you can easily bend and hence ruin the blade. Some users might also not like the fact that the thin and long blade will hardly be useful for anything else besides deboning or filleting fish.

While the names might make the difference between these two knives look obvious, many users still get confused on which one to buy because they are still very similar in appearance and many will even end up using them for the wrong purposes. But, here are some of their key differences to help ensure you buy the right knife for the job.

While it is common to find people using a filet knife to debone meats or the deboning knife for filleting, this is not what either of the knives are meant for.

Although they might still get the job done, you will probably not like the outcome, and so it is important to use each for what it is built to do.

With that said, the deboning knife has been built to separate meat from bones, and it will be very useful when deboning poultry, beef, and pork. But, it is also possible to use it to debone different kinds of fish especially those with thicker flesh.

The fillet knife, on the other hand, is purposely designed for separating fish skin from the flesh, but it also works well enough when separating the fish flesh from the bones. Many people will prefer to use the fillet knife to remove both the fish skin and also debone the fish instead of using two different knives.

The knife design is another obvious difference that you can spot by looking at the two knives side by side because the blades will have significantly different designs.

With a deboning knife, you will get a stiff but still thin enough blade that will typically also have a sharp tip. This design stems from the fact that the knife is meant to handle relatively tougher meats and bones. And the sharp tip allows the knife to pierce through cartilage and muscles with ease.

Given that a fillet knife is meant to cut the relatively softer fish flesh and skin, it does not need to be very tough. Hence, this knife will come with a thinner and more flexible blade.

Although it might look significant for some users, the blade curve on these knives plays an important role, and it is also one of the most significant differences between the boning and fillet knives.

Boning knives will feature a straight blade all the ways to the tip of the knife and will not have any fancy or functional curves. It will be almost similar to what you get on a typical kitchen knife only that the blade will be significantly thinner and much longer which is crucial for maneuvering through thick meat chunks.

Fillet knives, on the other hand, will have a more discernible upward curve and the tip is also curved. This curved design is meant to help make it easier to make a long, steady cut when filleting. However, this curved design makes the knife less practical for other cutting situations in the kitchen.

With modern knives, it is hard to give any type a blanket length as manufactures nowadays seem to give their knives almost any length they want. And it will often not be what you might consider normal for that knife types.

But, with that said, you can expect to get boning knives with blades that are between 5 and 6 inches long as this is what many users seem to prefer. Also, it will not be unusual to get some that will have blades that are over 9 inches long.

And the good news is that with boning knives, the stiffness and flexibility will not change much regardless of the length, and so even those with longer blades will still work well enough.

When it comes to the fillet knife, typical blade lengths will range between 4 and 9 inches with the most common sizes being 9, 4, 7.5 and 6 inches. However, a huge chunk of users prefers the 7.5-inch blades as besides the small fish it can also accommodate medium-sized ones.

While these two knives will be generally more maneuverable than regular kitchen knives given the tasks, they are meant to do, the level that each knife offers will differ.

With the extremely thin blade on the fillet knife and the discernable curve, the knives will be generally more maneuverable when comparing the two. You can easily maneuver the blade on this knife to make those delicate cuts with extreme precision.

Although the boning knife is also still not too badly off either, the stiffer blade and the fact that they are just straight blades means they might not give you the same level of maneuverability. But, you should not have any problem directing the knife through and around bones with enough precision.

Fillet knives might be more maneuverable thanks to the thinner, curved blade, but this blade also comes with some weaknesses and key among them is that it means the knife will not be able to tolerate a lot of force.

When using a fillet knife, you need to take extra precaution, and this is more so when you have to cut through thicker meats because applying too much force can easily cause the blade to bend or snap.

Boning knives seem to withstand way much more force since they have a significantly thicker blade, and this is what makes them much better for cutting thicker and tougher meats as you can apply a little extra force with no worries

Depending on the brand you are buying from, both the boning and fillet knives will be relatively more affordable or at least cheaper than a regular chef’s knife.

However, they will often not cost the same because, in many instances, the boning knife tends to be a little more expensive than the fillet knife given the thicker blade material and the fact that it is more versatile.

But, the difference in the actual amount of cash you pay might not be very significant. You can get a boning knife from generic brands from around $20 or slightly less but top knife brands like Wusthof sell there for a little under $150 or slightly more.

The price range for the fillet knife is almost the same as top brands will also sell their around the $150 mark but there are many cheap ones that can cost as little as $15 or even less depending on the brand you buy from, material used to make the knife and the blade length.

If you do a lot of meat deboning and filleting, it will be great to have both the boning and fillet knives on your set as they will come in handy for different applications.

But, because you will not always need to have both, it is important to know how they differ to make an informed choice. And from the differences in uses to the blade design and curve, this piece highlights everything you need to know, and it should now be clear what to buy.

For those that fish a lot or process a lot of fish, nothing beats a fillet knife, but if you like to debone your beef, pork or chicken before cooking, a deboning knife will be the best to have around.