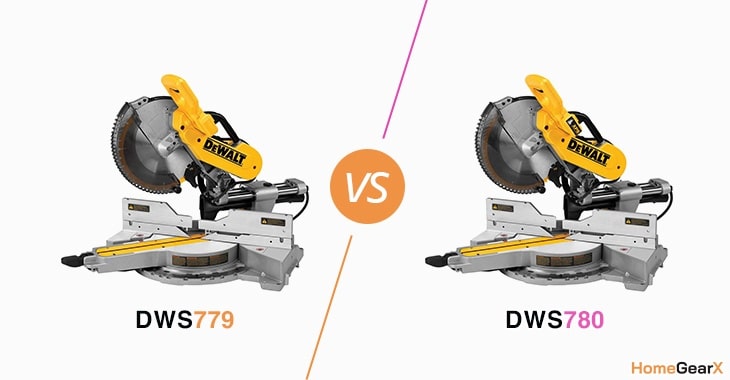 DeWalt has a huge variety of miter saws in the market that come in different prices and sizes, but their DWS779 and DWS780 are their bestselling.

Several things make these miter saws popular from their more powerful motors to their ability to make some highly precise cuts and the fact that they are relatively easier to use.

When looking at the DWS779 and DWS780 for the first time, many people cannot tell them apart as they look almost identical. Also, the two miter saws will have many similar features which makes it even harder to choose between them.

However, these saws also have several differences which for most woodworkers and DIYers will be the main determinant of what to buy. In this piece, we look at these differences and also highlight the pros and cons of using either saw. 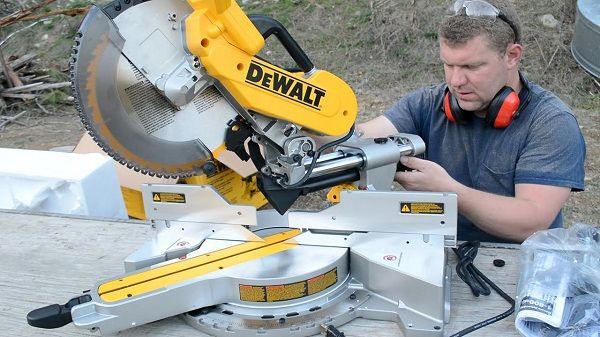 DeWalt’s DWS779 has been around longer than the DWS780 and is one of the most popular miter saws from the company. It is a corded electric miter saw powered by a 15-amp motor that will deliver 3,800 RPM to ensure the saw can handle a wide variety of tasks.

This miter saw has also been built for precision as its precise miter system and machined base support will ensure you get cuts that are as accurate as you can wish for in a miter saw.

Setting it up is also fairly easy even for novice users as the manufacturer does most of the assembly, and besides installing the blade and setting up things like the fence, there is nothing much the user needs to do.

This powerful miter saw is also built for durability as the heavy-duty and rust-resistant materials will ensure it serves you well for many years.

Woodworkers will love that it miters both to the left and right, and it will also provide decent cut capacity. With this saw, you can a 2×6 piece vertically and a 2×12 at the 45-degree angle thanks to its fantastic back fence design.

And it will be more versatile than many other miter saws out there. DeWalt makes it in a design that accepts various other attachments for versatility and can increase the cutting capacity significantly.

Better yet, you will never have any issues adjusting the bevel angle as it will come with an oversize scale that helps to ensure maximum accuracy.

However, unlike its successor the DeWalt DWS780, it will not have a laser guide. Instead of the bright LED that the latter uses, it comes with a more standard DeWalt XPS light.

DeWalt DWS780 keeps most of the amazing features that you get on the DWS779 and also adds a few extras. Also, they make some improvements on different things to make this an even better miter saw.

It will operate on the 15-amp motor which still delivers 3,800 RPM which means it will also be powerful and fast enough to make any typical miter cut. Like the DWS779, it uses the 12-inch carbide blade which is what many woodworkers prefer to have on this saw type.

This miter saw is a double bevel sliding model that will come with tall fences to support moldings up to 7-1/2 inches. And with its cam lock miter handle, users can be confident of fast and accurate miter angles.

But, what truly makes this miter saw stand out is the integrated Cutline Positioning System as it will ensure woodworkers always get more accuracy and excellent visibility by allowing for an adjustment-free indication of the cut line.

This will be a safer miter saw to operate as it comes with a transparent blade guard. And overall, it will offer you everything else that you would get on the DWS779, and so you will not be losing out on anything.

The only thing that many woodworkers might not like is that it is significantly more expensive when compared to the DWS779. Despite being efficient enough, the dust collection system would still do with some improvement.

The DeWalt DWS779 and DWS780 are the kinds of miter saws that regardless of which you choose, you can be confident you will end up with a top-notch product even if you pick randomly. But, as a woodworker or DIYer, it is always wise to know what you are buying. Here are some of their main similarities and differences to help ensure you make a wiser pick.

You can always trust DeWalt to have you covered when you need a powerful miter saw as most of their models are always fitted with a highly powerful and efficient motor.

The DWS779 and DWS780 will both come with a 15-amp motor which for their size and the price range is as good as it can get for this saw type. These powerful motors will allow the miter saws to cut through almost any kind of wood and do it super-fast.

The motors will also deliver the same performance because both are capable of speeds of 3,800 RPM, and so the motor power and speed should not be the determinant of what you choose.

These top-quality miter saws will come with the 12-inch blade which many DIYers and woodworkers seem to prefer for their miter saws as it is more versatile than the smaller or larger ones.

Also, it is a carbide blade which is a tough material that will ensure it lasts longer and that it will maintain a sharp edge long enough.

With the same blade and motor size, these miter saws will provide the same cut depth. Also, they will come with the same tall sliding fence which means they will cut the same material sizes.

At the vertical or 90-degree position, these miter saws will make cuts that are up to 6.75 inches long. When it comes to making crosscuts you can expect to get 2×12 bevel cuts at the 45-degree angle and 2×16 crosscuts for the 90-degrees angle.

These are dual bevel miter saws which means they will be more versatile than the many inexpensive single bevel options out there.

You can make bevel cuts both to the right and left, and the two miter saws will also allow for relatively wider bevel cut angles than many other models.

The DWS779 will bevel up to 47 degrees to either the left or right. The DWS780 seems to bevel at an extra degree on either side as it can achieve up to 48 degrees which will not be significant enough to give it an edge over its predecessor.

While for some miter saw users the lock type that you get might not matter provided it gets the job done, for others it is a crucial factor that they can never overlook.

Also, while still at the angle selection, DWS779 comes with a double horizontal rail that allows for even more precise cutting thanks to its innovative linear ball bearing. DWS780 uses a rail lock that will improve the accuracy for vertical cuts.

A good miter saw should always include a work light to help you see the cut line clearly when cutting or to guide you for maximum precision. But, DeWalt understands this better than many other brands and will always have this feature in most of its saws.

However, the DWS780 seems to outperform its predecessor here as it uses a more advanced Cutline Blade Positioning System that works alongside an LED light to ensure you always keep an accurate cut line.

Unlike the DWS779 which uses DeWalt’s regular XPS light, this more innovative system will always be properly positioned hardly ever needing any adjustments. With the XPS light, the laser system is easily knocked off which can affect the cut accuracy.

Like many other modern miter saws, these two are built to be safer to use. Provided you know what you are doing, you will hardly ever have any issue.

With the newer DWS780 model, DeWalt seems to add an extra level of safety. Unlike the DWS779, this miter saw will come with a transparent blade guard that allows you to see the blade better when cutting.

While weight might not seem important if you intend to be using the miter saw from one point in the workshop, it is still a crucial factor to keep in mind as it can determine the convenience of the saw at some point.

Despite these two miter saws looking identical and having almost the same parts and components, they will not weigh the same as the older model, the DWS779 is relatively heavier.

The DWS779 weighs around 67 pounds when assembled which is more than 10 pounds heavier than the 56-pound DWS780. If you are planning to be using your miter saw in different job sites, the 10-pound weight difference can be very significant.

When it comes to the price, it should be obvious that the newer of the two saw models will cost more as this is always the trend with most brands.

But, contrary to what many users expect due to the many similarities between the two saws, the DWS780 is much more expensive than its predecessor.

DeWalt hardly ever disappoints when it comes to woodworking tools. But because they have a wide variety of options for most of their products including miter saws, it can become a little hard to pick just one.

But the choice between their DWS779 and DWS780 should no longer be a hectic one. Despite their many similarities, these miter saws still have many differences such as the lock type, light, and their weight.

With this in mind, if you are looking for something more affordable, the DWS779 will be the best choice for you as it is significantly cheaper. But, if you want its newer version with a few nice extras such as a more reliable and accurate light, go for the DWS780.