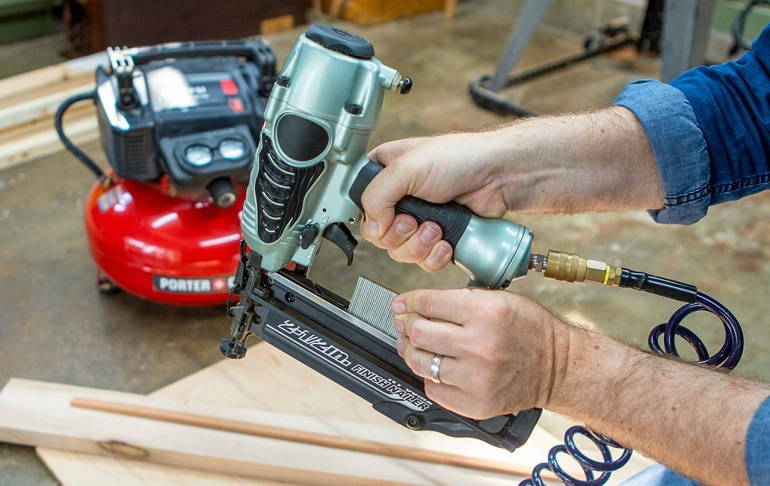 Nail guns can look intimidating even for the most experienced woodworkers. These power tools make jobs look effortless as they drive nails into the toughest woods with exceptional ease, which should explain why they are one of the most popular power tools out there. But, once you understand how they work, they should become less intimidating.

The strip style is those with nails loaded into a long chamber that looks like a firearm magazine. Coil style comes in a coil-like configuration, and the nails go into a round feed chamber. The two types have a spring mechanism that loads the next nail when you pull the trigger.

When you drive a nail, space is created, and the compartment’s springs generate pressure to push another fastener to that space where it is ready for firing into the workpiece.

A key advantage of the nail gun loading mechanism is that the glue holding the nails together ensures the nails hold more securely. The friction from the nail entering the workpiece melts the glue, and as it hardens again, it fuses the fastener to the wood more tightly.

How Does a Nail Gun Work? 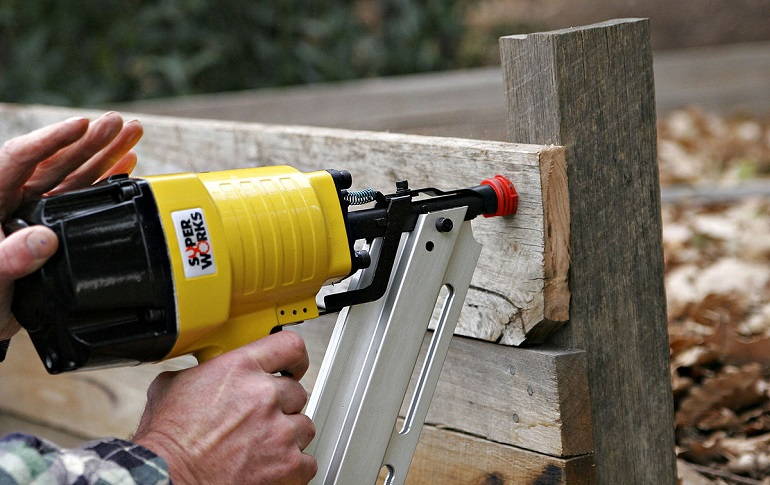 Pneumatic nail guns are the most popular option out there. An air compressor powers these nail guns, and so if you do not have one, you first need to get it before you can use the tool.

The air compressor connects to the base of the nail gun using a rubber hose. It then generates the optimal pressure required and feeds it to the tool via the barrel. This pressure is released when you pull the trigger on the gun, and it is what then forces the nail into the wood at super high speeds.

As you use the nailer more and more, the pressure in the air compressor drops. But most have a mechanism that allows the machine to kick back when the pressure drops to a certain level to ensure users get continuous, non-interrupted operation.

Given the need for an air compressor, these nail guns are a little hectic to move around, but they are some of the most powerful and are ideal for heavy-duty jobs.

Electric nail guns are either corded or cordless, but the latter, which is powered by built-in batteries, is the most popular option as it allows for more portability. These are also the most straightforward types and will be ideal for simple DIY jobs.

With this type, there are no cumbersome air compressors or hoses to deal with. Starting up is also quick as you do not have to wait for pressure to build up. However, these nail guns will not give you the same massive drive force you get with the pneumatic nailers.

Combustion nail guns are not as popular as the other two above, but their operation mode is similar to the pneumatic nail guns. However, unlike the pneumatic nailers, the pressure that drives in the nails comes from an internal combustion system like what you get in vehicles.

These nail guns have a combustion chamber just above the sliding piston and use gas cartridges as a fuel source for the system. Also, they have a spark plug or small battery for igniting the fuel to generate the small explosion needed to drive the nail into the workpiece.

Like pneumatic nail guns, the combustion types can handle heavy-duty jobs given the high drive force. But they have the added advantage of never having to deal with air compressors and annoying hoses.

A nail gun is a handy tool that you will use for almost all woodworking projects. While it might look complicated, it is quite a simple tool. The power tool only requires a nail load mechanism and generation of high enough force to push the nails into the wood.