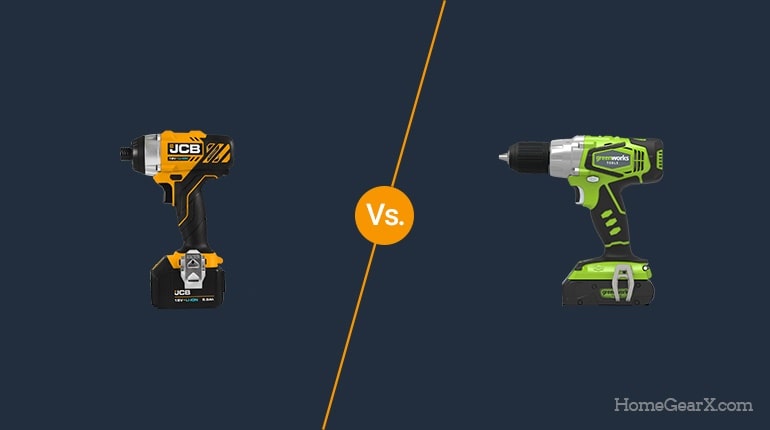 Any amateur or professional woodworker can attest to the fact that drills are very versatile tools. This is because they can be used as screwdrivers or to make holes in different materials such as wood, drywall, plastics, and steel.

On the other hand, impact drivers are specifically designed to drive screws. They do this with such intense speed and torque that they can drive thick and long screws into hardwood or remove stuck screws.

The difference between the two is basically like a tug of war between general purpose use (versatility) and specialization. To better understand this, let us look at the findings.

The greatest strength of an impact driver is also its biggest weakness. With so much power and torque, this driver can only be used as a screwdriver. If you try to use it for drilling, it can easily shatter the drilling bit, especially if pushing it in hardwood or heavy gauge steel.

Additionally, most impact wrenches are fitted with a collet that only accepts driver bits.

On the other hand, drills are built for versatile use. They cannot shatter drilling bits because they run smoothly. They also have keyless chucks that accept a wide range of drilling bits and driver bits.

Due to this general-purpose use, drills are generally preferred for DIY projects. However, professionals who require more power when working on sophisticated projects normally have impact drivers in their toolset.

2. How it Works: Static Rotational Force vs. Raw Hammering Power

Drills are run by a motor, which rotates the keyless chuck that then spins the attached drill or driver bit. This gives a smooth transfer of power and runs very quietly.

Impact drivers are run my motors but have sensors that detect when you need extra power. This means that when running it with no load, it operates like a drill.

However, once you press the driver bit on a screw head, an impact kicking mechanism consisting of a spring, hammer, and anvil is introduced. As the shaft turns, it stretches the spring which then releases with force to drive the hammer to the anvil.

This happens more than 50 times per second and creates a strong hammering effect that easily drives thick screws into hardwood and also removes stuck screws effortlessly.

With impact drivers, all the control is on the trigger, which places it on your fingertip. While this may make you feel like you are in charge, it can easily result in damages. This is because if you continue pressing the trigger after the screw has reached home, you may damage its head.

However, with drills, you get a slip clutch for torque control. With this mechanism, you can set to high torque for drilling through concrete, metal and other hard materials.

You also get a normal drilling mode for drilling through wood and other materials that are not very hard. Lastly, a screw mode gives just enough torque to drive a screw into the wood without burying it.

The screwdriver will stop automatically when you hit the right depth or when the screw head lies flush on the surface. This makes a drill easier to use.

Impact drivers have a compact body that is also very lightweight. This contrasts with the slightly larger and heavier drill and therefore, the former has a portability advantage.

As for the noise level, an impact driver generates quite a lot of noise due to its hammering action, which makes it louder than a drill. Both are available in corded and cordless options, so you can choose which one you prefer most.

In conclusion, these two tools may have a similar outward appearance but they function very differently. A drill is a popular DIY tool due to its versatility while an impact driver is more of a professional’s tool.