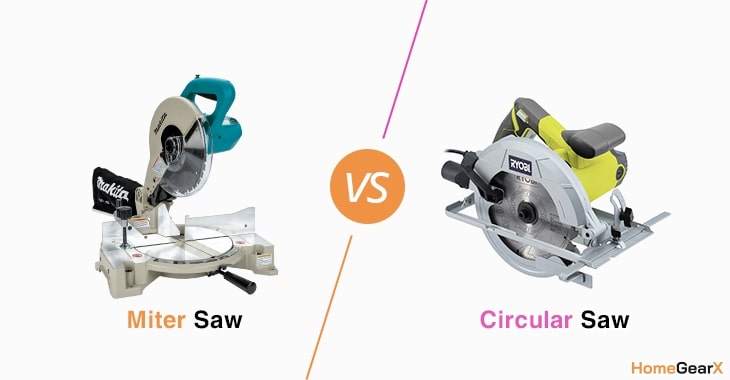 The miter and circular saws are among the most popular power tools with DIYers. Provided the job involves some sawing, they are what most people are likely to use.

Seasoned DIYers and pro woodworkers already know which between the two works best for certain projects and will hence not have any difficulties deciding what to buy. And many of these seasoned users will even have both.

But for the newbies just starting, things can be a little confusing and one can easily end up with the wrong saw or something that will not be very useful for their particular projects.

However, to make sure this does not happen to you, it is vital to understand the key differences between the miter and circular saws and what each is best for. The good news is that this is what this piece is all about. With this guide to help you out, choosing between the two should be a breeze. 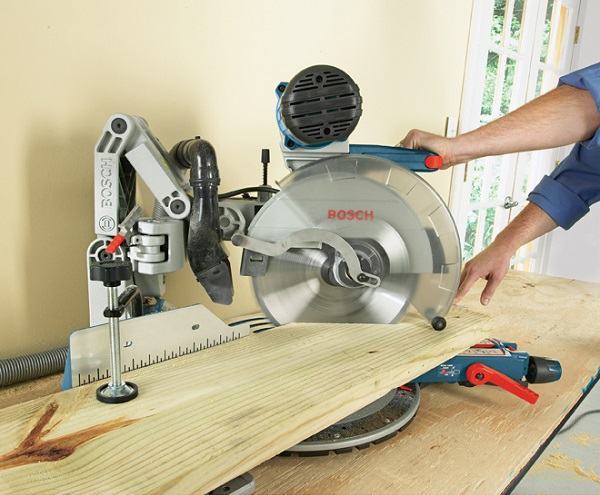 When compared to other power saws, the miter saws are a relatively new entrant into the market given that they have only been around since the 1970s. But, they have now become one of the most popular power tools for both DIYers and woodworkers.

Many users love these power saws for their high precision and ease of use and will be perfect for anyone starting their woodworking journey.

Miter saws are specialty tools which will not offer the versatility or multipurpose use of a circular saw, but they will do their core job which is making miter and crosscuts perfectly.

With these saws, the material remains in one place on the table and then the saw is lowered in to cut. These saws are designed for use from one spot and will hence in many instances require you to dedicate a specific part of the workshop to them.

Because the miter saws will include an adjustment handle, you can easily adjust the cutting angle to choose various angles. Better yet, these saws are capable of moving both vertically and horizontally which allows it to make both left and right side cuts for more flexible cutting.

When compared to the circular saw, a miter saw will not only be easier to use but also offer a safer operation for the use. However, these saws will not be very good for cutting larger stocks as you cannot lift and move the blade across the workpiece like a circular saw. 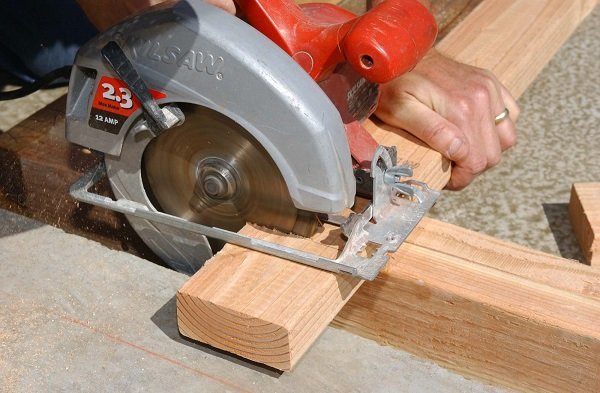 Anyone looking for a smaller and more portable power saw that you can easily carry and use from almost anywhere will always end up with the circular saw as one of the main options as this is where it excels.

These power saws are more versatile than miter saws as they are designed for multipurpose use given their ability to make a wide variety of cuts with ease.

A circular saw is a simple handheld tool that uses a circular blade that is often 7-1/2 inches in diameter, and you will need to move it physically over the stock to cut. And as long as you set and guide the saw well, you can make almost every cut you would use a miter saw to cut.

When shopping on a budget, the circular saw will also be a great pick as most models come with a smaller price tag. Having been on the market for a way much longer time than the miter saw, you can also be confident that there will be more options to choose from when buying one.

With the right blade mounted on them, the circular saws are also capable of cutting through almost any material from wood to ceramic and plastic.

But these saws are more dependent on the user which means your skills will determine the cut quality that you get, and they often leave rougher edges on the workpiece. They are also relatively less safe given that they produce more kickback.

If you are looking to buy a power saw that will be very useful for different projects, both miter and circular saws will be a great choice. But because in most instances you will only want to buy one of the two, understanding the following differences will allow you to make the right pick.

The types of cut you intend to use the saw to make will be the main determinant of which between these two you go for. While they can be used for some similar cuts, they will excel at different kinds of cuts.

Miter saws are more of a specialty type of saw that has been built for making crosscuts, and there is hardly any other saw type out there that will outperform it for these kinds of cuts.

These specialty saws will be perfect for making most other angled cuts like bevel and miter cuts. Although the circular saws can still make these angled cuts, miter saws allow you to cut them more accurately and faster.

Unlike the specialty miter saws, circular saws are designed for versatility which means they will be more appropriate for multipurpose use. These saws can make more types of cuts than the miter saws.

You can use your circular saws to make rip cuts, cross cuts, miter, and bevel cuts and even make plunge cuts which are cuts that start at the middle of the workpiece. But, the quality of these cuts will be highly dependent on the user’s skills unlike when using the miter saw.

You can use your saw anyway you want to as long as it gets the job done fast enough and does it correctly. Hence, with both the miter and circular saws, you will not be restricted to using the tool for a few specific projects.

With that said, like any other power tool, there are certain things that most users will typically use either of the saws for as they seem to do a better job for these projects.

For the miter saws, the typical uses will include making door frames, crown moldings, picture frames, and window casing. But, they will be perfect for any other project where you need to make some delicate and precise cuts and when making curves.

Read More: What is Miter Saw Used for?

The more versatile circular saws seem to excel at projects like cabinet and rack making, masonry work and also for roofing. When you need to cut anything fast and where a lot of precision is not required, the circular saws will be handy.

Read More: What is Circular Saw Used for?

While there are countless models of both the miter and circular saws out there from different brands, they can all be classified in just a few types. And as you try to decide which one to buy, it will also be a wise idea to know these different types.

Like miter saws, circular saws are also built to give potential users different options to choose from and they will come in three main types which are sidewinder, the worm drive, and hypoid saws.

Cutting accuracy is vital when using any saw because if what you have does not deliver accurate enough cuts, it will not be very useful for you.

Here both the circular and miter saws can still make some good enough cuts. However, the miter saw seems to have an edge, and this is more so when it comes to cutting curves and angles as it will deliver more precision.

With miter saws, you will only need to place the material on the table and lower in the blade where you want it to cut. But with circular saws, you need to direct the blade manually which increases room for error, and hence making it less accurate.

Almost anyone can use the miter saws and do it effectively without damaging the workpiece and also get some precise and accurate enough cuts.

With a miter saw, beginners will only need to follow the guidelines and do a few trial cuts and in no time, they will be able to use one with almost no issue at all. Better yet, you will not need to guide the blade manually which can save you a lot of time and effort.

When using a circular saw, getting a straight cut can be a daunting task given that you will be directing the blade manually. Without a good jig, you can easily ruin the stock.

Overall the circular saws are more intimidating than miter saws. If you also factor in the kickback that comes with using one, it should be clear why these might be better left to the pro woodworkers.

While many woodworkers and DIYers will do most of their work in the garage or workshop, situations will always arise where you might need to carry and use your tools from other places.

When this happens, you will be happy to have a smaller and more compact power saw like the circular saw as it will be easier to pack and carry from one job site to the other. Most are more lightweight and will come with a nice carry case. Better yet, they are also available in cordless models that will be even more portable.

Miter saws, on the other hand, are larger and are not designed for portability and will hence be more deal for use from one sport in the workshop. But, it is still possible to pack your miter saw and put it in your track. However, it will not be as convenient as the circular saw.

Price is always a factor with power tools as they do not come cheap. Hence, as you try to pick between the miter and circular saws, it will be important to know how much you are likely to spend on either.

Overall circular saws tend to be the more affordable of the two power saws as you can get a basic model for as little as $40. And even if you prefer the more feature-rich and advanced models, you will hardly ever spend more than $300.

You can be confident that you will have a great power saw that will help with various projects on the workshop whether you go for the miter or circular saw.

However, it is important to know which between the two will suit your specific needs. With their key differences highlighted in our guide above, this should now be clear even for the novice and beginner users.

To sum it up, the miter saws will be perfect for anyone looking for a specialty saw for making crosscuts and bevel cuts more accurately. The circular saws, on the other hand, will be more ideal for those on the hunt for a more portable, versatile and multipurpose handheld power saw.