At first glimpse, the scroll and band saws look quite similar as they will both have a blade running perpendicular through the center of the tool and a work table. Some uninformed buyers can even assume the scroll saw is just a smaller band saw model.

But, despite the obvious similarities, these are quite different tools that have been built for different applications and will hence be ideal for different kinds of users.

However, it is not always easy for many potential users to tell which between the two saws will be ideal for their projects. Hence, before you start shopping for these tools, you need to know what each is good for and the features that set them apart.

What you intend to use the saw for will ultimately determine which saw between the scroll and band saw will work for you. But, here we explain their key differences and also provide an overview of the two tools with their merits and demerits to help you understand them better. 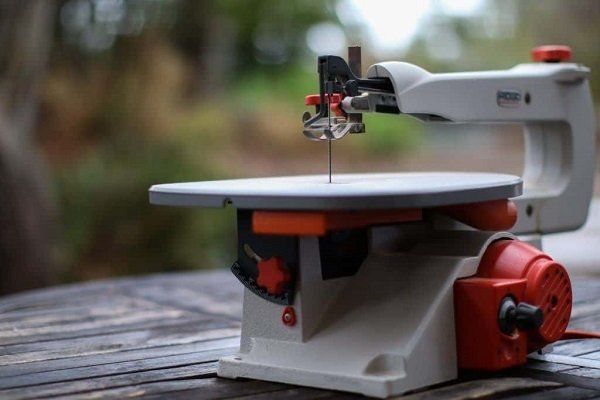 Anyone into wood crafts should already know about the scroll saw as it is one of the most commonly used power tools by craftsperson and artists.

This saw will use a thin and short blade that will in many instances be under a quarter-inch thick. It is this thin blade that allows it to make the intricate and delicate cuts with high precision.

Unlike most other power saws, the scroll saw will often be foot pedal operated which gives users better control when in use. Also, these saws will work with minimal noise and produce significantly less vibration.

When compared to the band saws, they will be able to make a wider variety of cuts which makes them relatively more versatile. There will be minimal downtimes when using this saw as it has been designed to make then blade easy to remove for faster changes.

Inside plunge cuts are possible when using a scroll saw something that will be hard to achieve with most band saws. These saws will also come at a more affordable price tag and in a smaller and more lightweight size to make them portable.

But, if you are looking for something to use when dealing with thicker and heavier materials, the scroll saw will not be very appropriate as the smaller and thinner blade cannot handle these materials. 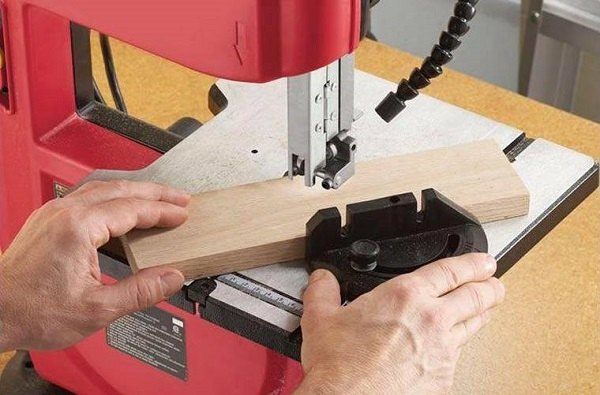 If your projects will require a more powerful machine that can easily cut through several pieces of thick wood, the band saw will be a more appropriate choice. These saws are generally more powerful when compared to the scroll saw and will hence be quite handy in the workshop.

Unlike scroll saws, they will come with a longer and wider blade which makes them more ideal for carpentry and woodworking. While this larger blade might not offer the precision of a scroll saw, it offers more cutting power which allows it to handle the hardest materials.

Band saws will make use of a couple of wheel systems with one at the top and the other at the bottom. The saw blades on the band saw will stretch between these wheel systems and will cut in a continuous, rotating band which explains where this saw gets its name.

And given the relatively larger size of the band saw, it will also come with a significantly larger table that allows it to accommodate larger materials.

When using a band saw, it will be possible to rip stock as you would with a table saw but the material has to be relatively thinner. Most of these saws are also known for having a much more efficient dust management system than what you would get on a typical scroll saw.

The notable shortcomings that come from using these saws are that they will not be very good for fine detail cutting. They can also be quite expensive when compared to scroll saws.

Both scroll and band saws are great tools to have around for craftsperson, DIYers, hobbyists, and professional woodworkers. But while they might look almost the same at first glance, these are quite different tools. And here are their main differences to help you decide which one to add to your arsenal of power tools.

When compared to other power saws like the table and circular saws, then scroll and band saws will have much smaller blades and will also come in a different shape.

The blade on the scroll saws will be typically thinner and smaller than what you get on a band saw given that it is meant to make more intricate and delicate cuts.

These thin blades also allow you to make small patterns and more complex shapes such as when making wooden toys and jigsaw puzzles.

And you can get the scroll saw blades in four main types which are the standard tooth, skip-tooth, double-tooth and reverse skip-tooth blades. But there are also a few other types that are not very common such as the crown-tooth, precision-ground and spiral blades.

Despite still being quite small, the band saw blades will be much longer and wider than the scroll saw blades which is what allows them to cut thicker and heavier materials.

The extra width is what gives the band saw blades the strength required to cut into tougher materials and to handle the extra power generated from the more powerful motor.

Also, these blades will be available in different types meant for different applications, but the three main types are regular-tooth, hook-tooth and skip tooth band saw blades.

Besides the differences in the blade size and design, these saws will use different cutting actions when in operation which also affects what you can use them to cut.

Scroll saws use a reciprocating action when making the cut which is whereby the blade moves up and down in high speeds. To cut with this saw you have to pass the material through the blade.

Band saws will use a relatively more complicated cutting action than this because the blade moves in a continuous loop, and you will also need to bring the material to the blade to cut it.

Nowadays it is not always easy to tell the specific uses of a power saw because many users tend to get quite creative and use their saws effectively for tasks that one would not even imagine.

However, the scroll saws have been built for making delicate and intricate cuts. With the thinner blade size, they can make some amazing patterns on the wood. Also, many users will typically use them when handling more delicate pieces because they are less likely to damage the piece.

If you do a lot of decorative jobs and crafts or just like giving your pieces some clean and precise cuts, you will be better off with the scroll saws. For specific tasks like making jigsaw puzzles, wood carvings and wooden letter/numbers, few tools out there can outperform a scroll saw.

Band saws, on the other hand, will be more ideal for heavy-duty applications, and you will typically find woodworkers using them to make fast and accurate cuts where a little aggressiveness is not an issue.

Also, the thicker blades often come in handy when ripping materials and do not have a table saw. As for specific applications, many carpenters and woodworkers will always turn to these saws when they want to make shelves, furniture or cut trim.

Given their typical uses, it should be now clear who these power saws will serve best but for anyone that uses power saws often, they will both come in handy at some point.

With that said, the scroll saws seem to work best for craftsperson, artists, hobbyists that like making different items at home, sign makers and with the right blade, they can be one of the best tools for wood sculptures.

The band saws will be more useful for making regular power saw cuts, and you are more likely to use it often in the workshop than the scroll saw. Hence, this tool will be perfect for woodworker, carpenters, DIYers and with the right blade, they can be the star in a metalworking shop.

Read More: What is Bandsaw Used for?

There is quite much that you can do with both the scroll and band saws. And while they will probably still not give you the versatility of others saws like the table saw, each is still versatile enough.

However, when it comes to versatility, the smaller and more precise blade on the scroll saw seems to give it a slight edge as it will be good for a wider variety of cuts. Whether you are making intricate and delicate cuts or want to make regular straight and curved cuts, the scroll saw will work well.

Band saws seem only good enough for regular and typical cuts because when it comes to making intricate ones, they can let you down. But, with a good jig and the right blade, you can still do quite a lot with your band saw.

For DIYers, craftsperson or woodworkers that intend to use their saw from a dedicated spot in the workshop, its size will not matter as they will hardly ever need to move it.

But, for most users, at some point, it might be necessary to carry and use the saw from a different spot which then makes it important to have something smaller and more portable like the scroll saw.

A typical scroll saw will be much easier to pack and carry around than a band saw. With the latter, most models will be bulkier and harder to transport which in for some users can be quite inconvenient.

Like many other power saws, both the scroll and band saws will not come cheap, and so you should be ready to make a significant investment to get one.

But, their prices will differ significantly given the differences in their features, size, and overall uses. And as expected, the larger band saws tend to be significantly more expensive when compared to the scroll saws.

While you can still get a good scroll saw for under $100, you will need to spend at least $150 to get a very simple and basic band saw. But with that said, it is still important to note that both saw types will have some top tier models that will retail for hundreds of dollars.

The more power tools you have around, the more projects you can complete without having to rent anything, and so having both the scroll and band saws is not a bad idea.

But if like many users you have to choose one or can just buy one at a time, you need to understand the differences between these two amazing tools and the projects that each has been built to accomplish.

From their differences in the blade design and size to the difference in size and price, it should now be clear what to expect from each of these saws.

For those that might still be stuck on the fence on what to buy, the scroll saws will be the perfect choice for your small projects that involve delicate and intricate cuts and will be the best for craftsperson and hobbyists.

Band saws will be the more appropriate tool for general woodworkers and carpenters as they are great for cutting larger and thicker materials and are designed for increased productivity.