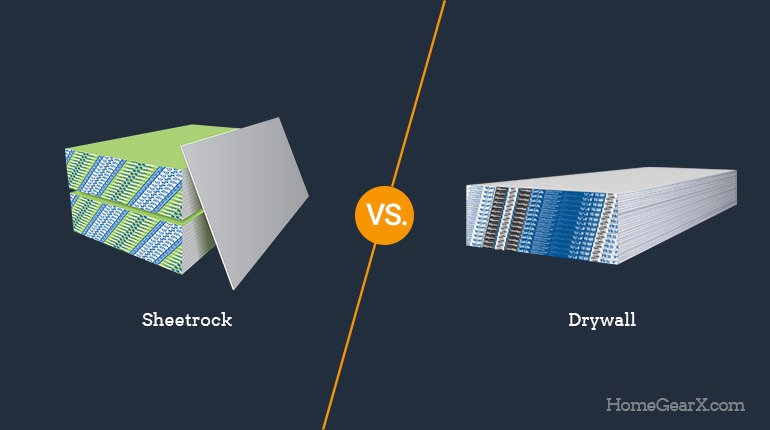 If you are planning to do a remodeling project or are in the process of finishing up your house, Sheetrock and drywall are two terms you are likely to come across when shopping for wall and ceiling materials.

Although many people, including professional contractors, use the two terms interchangeably, they do not always refer to the same thing. Here we highlight the key differences between the terms to help you know what you are referring to with either drywall or Sheetrock.

Drywall will refer to a lightweight panel used to construct interior walls and ceilings during a renovation or construction project. This building material is typically made of a gypsum plaster that is sandwiched between two thick papers.

Traditionally, drywall is used in place of plaster and lath as it offers several advantages, such as being more lightweight and allowing for a faster installation. Drywall also goes by several other names such as wallboard, plasterboard, and gypsum board.

Drywall has been in the market as a plaster alternative for more than 100 years now. It was first introduced in the late 19th century (around 1894) as Sacket Board.

Sheetrock is a brand of drywall, the same way Kleenex is a brand of tissues. But, given that it is the most popular drywall brand in the USA and drywall boards from the brand will have the name “Sheetrock” written on them, many users tend to refer to them as just Sheetrock.

Like regular drywall, Sheetrock is used as a plaster and lath alternative when making interior walls and ceiling. However, some types are weatherproof to allow you to use them for exterior ceilings.

Sheetrock first came into the market in 1917. This board was an improvement of the Sacket Board by the U.S. Gypsum Company, but it did not have any functional differences with the latter.

3. Types: Both Drywall and Sheetrock Come in Several Types

With both regular drywall and Sheetrock, you will get plenty of options to choose from for different applications and projects.

For drywall, the standard panels come in a thickness ranging from 1/4 to 3/4 are the most common. However, you can also get it in the fire-resistant panels with special additives to make them more resistant to fire. Other types include the green boards, which are more resistant to moisture, and blue boards with additives to ensure better water and mold resistance.

4. Average Costs: Sheetrock Panels tend to be a Little Pricier than Regular Drywall

It is not always easy to allocate a specific price to drywall as it will largely depend on the brand you buy. What’s more, there are also many cheap imports from China that have flooded the market.

However, you should expect to spend between $0.4 and $0.65 per square foot of regular drywall on average. But with that in mind, it is still important to note some premium brands sell certain drywall types for much more than this.

On the other hand, Sheetrock will set you back around $1 to $3.50 for every square foot you buy. But, like regular drywall, some special types of Sheetrock can still cost way much more than this.

Except for the few chemicals that the U.S. Gypsum Company adds to Sheetrock to allow for patenting of the formula, there is no significant difference between it and regular drywall.

However, because all drywall is not created equally, there are many cheap and substandard knockoffs in the market. Hence, it will always be a great idea to stick with a reputable brand product like Sheetrock.

But, ultimately, the choice between Sheetrock and regular drywall will boil down to your personal preferences.