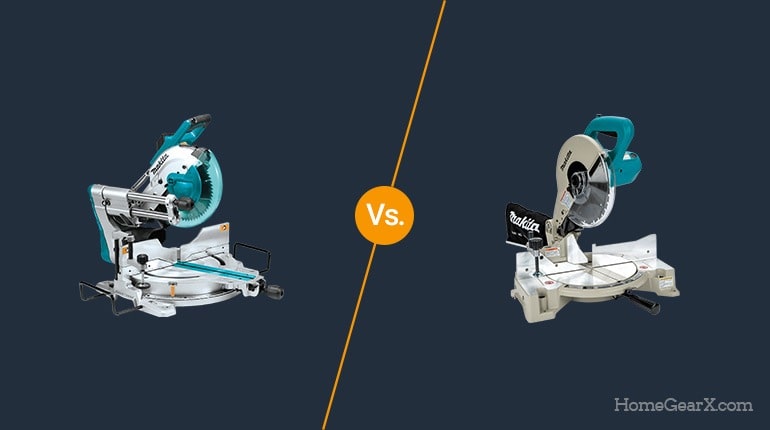 Miter saws are the most popular tools for trimming (crosscutting) and angle cutting. These types of cuts are very common for decorative finishes, which can be seen on the corner of picture frames, crown molding and other angled joints.

However, there are different types of miter saws, with the most commonly used ones being sliding and compound miter saws. To make sense of their differences, we need to look at the features of each of these types first.

The main difference between these is that the sliding miter saw has rails that allow the blade to slide along a guided path. This enables you to make longer crosscuts while maintaining high accuracy.

For instance, with a 10-inch compound saw, you can cut a maximum width of about 6 inches. However, with a sliding miter saw, this can go up to 12 inches, making it very practical.

As a result, the sliding type is recommended for cutting long crown molding, baseboards, and most cabinet boards. On the other hand, a compound miter saw is ideal for cutting short stocks such as the ones used in picture frames.

The rails of a sliding miter saw work against it when it comes to size and weight. This extra hardware adds some weight to the saw and also makes it larger. Therefore, if you have a small workshop, a compound miter is better since it is more compact.

This also has an impact on portability. Though miter saws are usually kept stationary in workshops, some projects require you to move it to the site. In such a case, transporting a compound miter saw will be easier than a sliding miter saw.

Because they lack sliding rails, compound miter saws have nothing blocking the path of the blade going downwards. Therefore, their blades are designed to cut deeper as compared to a sliding miter saw.

As such, if your project requires thick stock, a compound miter saw is the ideal choice for cutting them.

Though a sliding miter saw has more hardware and offers more functionality, this comes at a cost. It is significantly more expensive than the compound miter saw and thus, if you are on a tight budget, the latter is the recommended option.

Compound means the saw can make both miter and bevel cuts at the same time. However, with single bevel compound miter saws, the blade can only turn along the vertical axis in one direction.

This means you can only make bevel cuts in one direction and therefore, you have to flip the board so that you can cut the other side.

A double or dual bevel compound miter saw can make bevel cuts in both directions because its blade can turn to the left or right along the vertical axis. This makes it easier to use because you can chop your workpiece at any angle without flipping it.

While comparing sliding and compound miter saws, it is quite difficult to determine which one is better, unless we consider the project at hand.

Both perform very well when making miter cuts, bevel cuts, and crosscuts but if your project requires wide boards, then a sliding miter saw is better.

However, if you have limited workshop space or you need a saw that you can easily transport to the site when working on remote projects, then a compound saw is better.